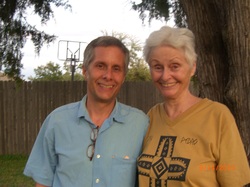 My grandfather—Edward Enns, a dust belt farmer-preacher-singer—was diagnosed with HD in 1961, dying in 1977. His daughter, Marilyn, became my mother in 1962. Our family always knew she had a 50/50 chance of having the HD mutation, but as she passed her 30s, 40s, and 50s with no clear symptoms, our family thought we had dodged the bullet. But we eventually noticed signs and a genetic test returned positive for HD when she was 69.
I responded to this news in part by writing Mom a song that integrates elements of our relationship, experiences, and beliefs. When I first left Ohio for College in Rhode Island, l sent her a startlingly colored Autumn leaf for her October birthday. I've continued this tradition for each of the 30 years since - from Dallas, California, Chicago, France, Congo, and Cameroon. So leaves play a central symbolic role in the song—their deep colors evoke ideas of beauty, death, and the promise of life. Here's a link to the song: "Leaves."
A few months later, in December 2010, the results of my own genetic test showed that I also have the mutation. Most of my professional life has been dedicated to encouraging artists in communities around the world to use their own arts to connect to God and bring healing. I've seen this approach work with my mom and want to see if we can extend it to others affected by HD. That's why Make Life | HD exists.

The Logo Means Something

​My mom's birthday is in October, and I've been sending her cards with Fall leaves from everywhere I've been since leaving home in 1980. So brightly colored leaves have become an important part of our relationship. When Mom was diagnosed with HD, I used their symbolism of beauty, death, networking, and hope in writing her a song (more in The Back Story).  I asked James Harris (DawnPaladin.com) to design a logo that incorporates these themes. Thanks, James.